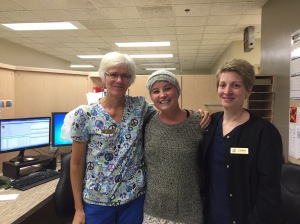 We are in the middle of Brain Tumour Awareness Month (#BTAM) in Canada and the US, so I wanted to continue to update my experiences with treatment. As I’ve shared in literally graphic detail, last Sept I underwent an awake craniotomy to remove most of what turned out to be a Grade III oligodendroglioma from my parietal lobe. In my last post, I gave you a quick snapshot of my treatment path since surgery. Today I’m going to focus on my experiences during the six weeks of combined radiation and chemotherapy that I started about a month after surgery, in October 2015.

Going in to the radiation and chemo treatment, I knew that the surgeon estimated they had been able to remove about 90% of the tumour, and that my post-surgery MRI confirmed this, showing some tumour residue cells remaining. While recovering from surgery, which was remarkably smooth, I focused on researching what I could do to get through this next stage of treatment with as few side effects as possible. Since my original diagnosis in 2012, I have been eating a ketogenic diet, which I’ve written about extensively on this blog. This is a diet that removes sugar and carbohydrate, and replaces healthy fats as an energy source. The first thing I did was get in touch with a nutritional therapist I’ve worked with in the past, to get her advice on any changes I should make in my nutrition during radiation and chemo (see Patricia Daly for more info).  I also registered to complete a course I’d been working on, to become certified as a Cancer Exercise Specialist, with a focus on yoga.

Through my research, reading and talking to other patients online, I set some goals for my six weeks of treatment:

The treatment schedule I had was a radiation treatment every weekday afternoon, and daily oral temozolomide every day, for six weeks. How did I do against my goals? Pretty good, I think. I scored 100% on goal #1. I never missed making the bed or taking a shower, though I did fall asleep in front of the TV in the late afternoon in my easy chair most days. I learned that I would get irresistibly sleepy about two hours after radiation, so I went with it. See goal #4.

On goal #2, I managed to keep pretty active. For the first four weeks, my mom and I swam and did an aquacize class every day before my radiation treatment. During the last two weeks, I missed some days at the pool due to fatigue but kept up a yoga routine at home. In fact, during my treatments I finished the online testing component required for my Cancer Exercise Specialist designation.

Goal #3, well, I might have been too successful with that one. I was told so many times that I may lose my appetite, that the taste of foods may change and become unpalatable. So I determined that I would not worry about measuring ketosis, I would just eat what I knew to be a good diet for me, maintaining keto diet principles. Well, it turned out I had a voracious appetite, and if the flavours of food changed, it was for the better. A typical day’s eating during this time for me was to get up around 3 am (because I was hungry and I’d been sleeping since 4 pm the previous day!), and eat a generous bowl of grain-free cereal (a mixture of toasted coconut, seeds and nuts) with coconut milk, and a kombucha tea. Then I’d sleep for another hour or so, and eat a second breakfast of an egg, two slices of bacon, an avocado and a coffee with butter and coconut oil in it. After that, I’d be ready for some computer work, yoga, and off to the pool. A snack-type lunch of nuts and cheese with a breve latte usually preceded radiation, when I would also take my chemo pills. Finally, my husband would have to wake me up for a supper of chicken or fish and salad or something similar. I gained weight and steroid puffy cheeks, but didn’t feel ill at all. The irony of goal #3 is that I actually overate some things so much, that it’s taken me months to even want to look at them again (avocados, my keto cereal, buttery coffee).

Overall, my experience at the radiation department of my local cancer centre was nothing short of stupendous. The staff there, the level of organization, caring, and making you feel like they really know you and care about you, was impressive. It was like a little eye of calm in the hurricane of long waits, and shuffled appointments that can be the rest of the cancer treatment treadmill. It was not a sad or scary place to go everyday. I quite miss the people I saw there at every visit, though not enough to want to go back ;). See the photo above, of me in between two of the many terrific technicians that worked on my unit.

I am still practicing most of these goals, actually, as I move on to six months of higher dose oral chemotherapy after radiation ended. But that’s a story for another day.

Please support Brain Tumour Awareness Month by sharing your own stories, supporting patients or caregivers you know, or sharing my story if you think it might help raise awareness.